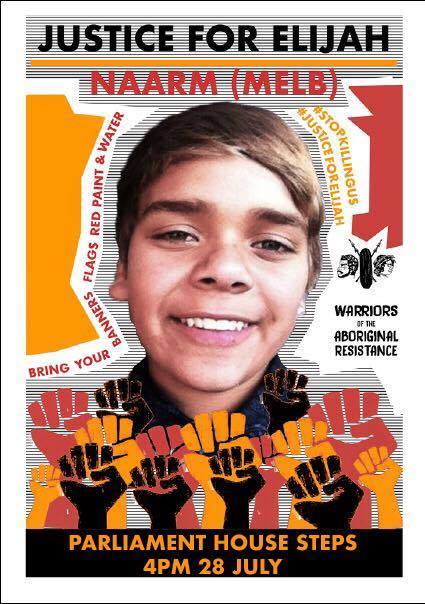 Imagine, if it were reality, that an Aboriginal Child, born on country, would live their journey in peace and harmony, culturally and spiritually safe. Imagine if that same Aboriginal child didn’t actually have to imagine living out their birth right, that they were born and raised on their country with no interference and free from the intensely traumatic nightmare that is assimilation and genocide.

Elijah Doughty, a child of the dreaming, innocently born into a country called Australia. A country that is rich in culture, values and beliefs. Aboriginal culture is not one of violence and of brutality, our culture is undeniably embedded with respect, respect for our ancestors, elders, culture and community.
On the 29th of August 2016, Elijah Doughty was murdered. Murdered at the hands of a white male driver. On the 21st of July 2017 the Australian Justice System failed. It failed when it found the white male not-guilty of murder, rather guilty of reckless driving and sentenced to 3 years’ imprisonment and 2 years loss of license. Further to this, on the 21st of March 2018 the man who murdered our dreaming child was granted parole after 19 months in prison. He is now free.

The way in which Elijah left us for the dreaming, is traumatic and unjust in itself. Elijah became victim to a monster, a monster that is larger than the murdering white male. Elijah became a victim of systemic racism and the legacy left behind by inhumane, racist Australian Government policies and laws. Elijah became a victim to the monster that is stomping all over the rights of my people, the rights of the first peoples of this country.
It is nothing but depleting, in knowing that an Aboriginal child’s life is seen in the eyes of the justice system as worthless, leaving a wave of worthlessness amongst Elijah’s people and community.

When a child is violently chased and ran down to his death, you would only hope that systems that are in place to protect would protect, you would only hope, that systems that are in place to provide justice to victims and families, would do so. The Australian Justice System, Police and Government bodies are yet again, upholding the legacy of past racist policies and practices and within this, we lose our dreaming child.
Elijah our dreaming child, I am sorry, that you became a victim to this monster. I am sorry to your family, your brother boys and sister girls. I am sorry to your community. I will refuse to normalize your passing and I refuse to see your name and face lost amongst other names and faces we have lost as victims to this monster. Elijah our dreaming child, your physical journey here with us on earth was violently taken, but your spiritual journey has not.
To our children and our young people, you have rightly lost faith in the system that has enabled unjust actions towards your brother boy. We will rise and fight together and we will rise and fight for Elijah.

To the nation that is Australia, you are obliged to fight for justice for Elijah. Do not let this injustice go by the way side, for we have lost a dreaming child.
Elijah our dreaming child, may you rest, as we rise.